“Hot milonga before the last Tango Trip…A surprising journey of image, dance and that makes you laugh. A very good Tango Trip, a surrealistic dance piece that surprised and it was very enjoyable” 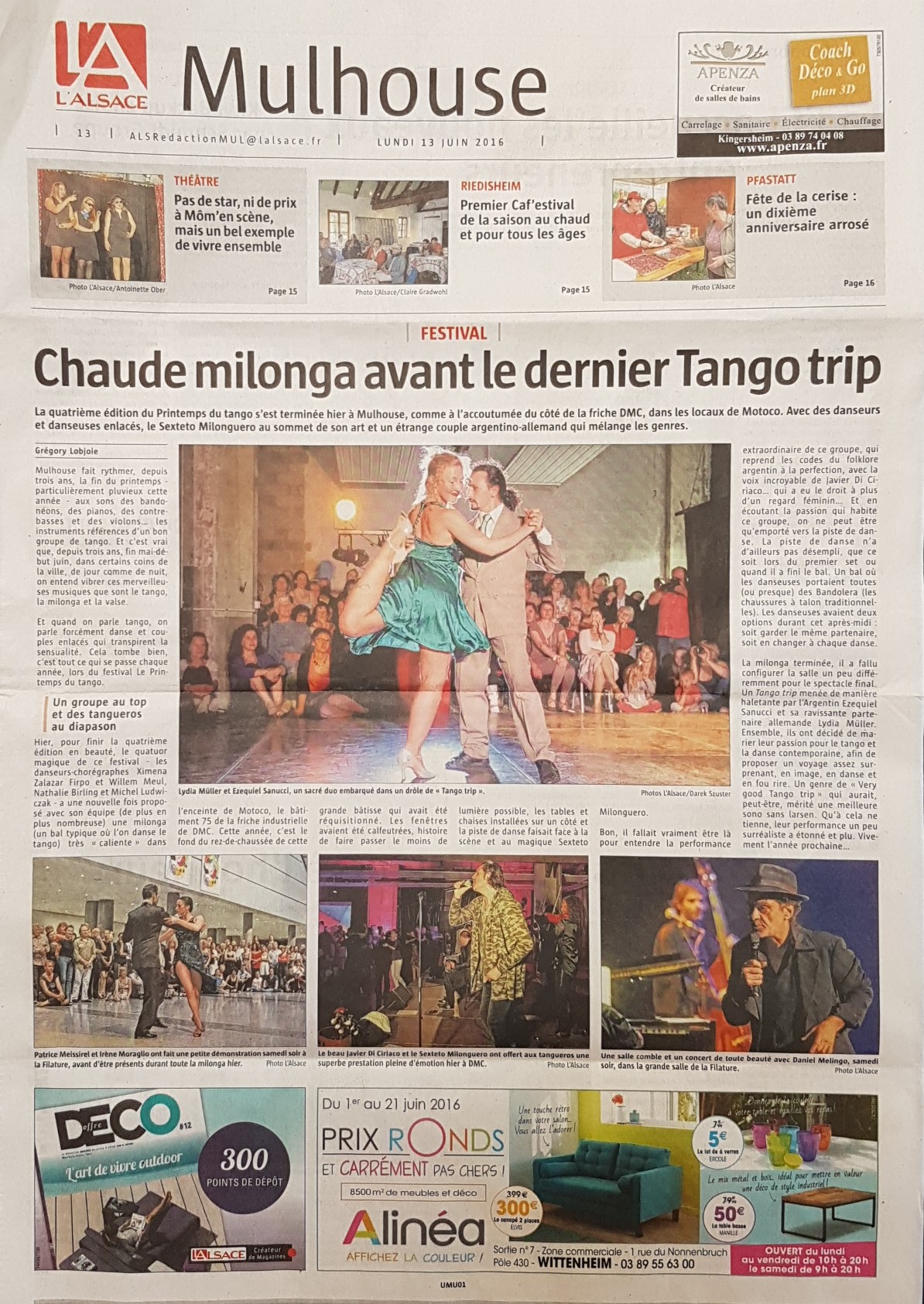 “The tango piece did by Ezequiel Sanucci (who also danced very passionate) went very well and seemed to have found a harmonious fusion of tango-spheres.”

“The jury found that they performed a very special contemporary tango piece and praised the good build up of the choreography, “highly original, innovative and pure dance with the sensuality of the tango,” as it was said by Ruut to Velthuis, head of the jury of the seventh edition of this growing talent hunting.”

“Sanucci presented a theater play under his direction and writen by himself, he showed a work with a high quality that achieves a theatrical proposal together with the fusion of tango and contemporary dance. Sanucci added to the successful choreography a comedy which gives a good rhythm to the development of the story. At the end of the play the performers received a big applause. ”

“The passionate and seductive bodylanguage to the rhythm of Buenos Aires characterizes the approaches, romance and relationship conflicts.”

“Original and touching, from the other side of the Atlantic, Ezequiel Sanucci, a versatile Argentinean dancer and actor, successful in Europe, brings grace and melodic Milonga accent on stage, by representing The Netherlands in the 35th Festival Internacional de Teatro de Oriente. His piece opened yesterday the festival, and won the avid theater audiences with a fusion of tango and contemporary dance.”

“Sensuality, passion, dance and a good text. These are the ingredients of the piece Tango Residence Permit.”

“Contemporary dance, accompanied legendary tango rhythm to tell a strong story full of free movements and sensual rhythms typical of the southern region. A work that in the words of the performers is based on a thorough research work, which added to the use of multimedia, provides tools and enriches a contemporary and abstract staging with expressive movements. The fact is that this piece to the satisfaction of the performers garnered the best applause from the audience.”

“They (Sanucci and Müller) made an abstract representation that delighted the audience with their loads of emotions and feelings transmitted through each text sentence and their body expressions.”

“The sadness, love, passion, desire and seduction, is a part of what the audience could percieve by the personification of the actors in this piece.”

“The play, directed and written by Sanucci, is a theatrical proposal where tango and contemporary dance are merged. In addition to that, a comical audiovisual material made the audience laugh. As well the theater audience was impressed by this unique choreography which has been performed so well by the performers. ”

“The audience could enjoy the passion of Tango in an extraordinary piece with Argentinean roots and a Dutch accent.”

“Sanucci shows in his piece the reality of Latinos in Europe. He tells the story of an Argentinean living illegally in the Netherlands … (the piece) was widely applauded when it finished.”

“The artist speaks of an intercultural love within the scenes in which the Argentinian dance gets an extra dimension through the use of multimedia. The piece of Sanucci was well received by the audience. ”

Carol: “I loved the piece and that the actors made the effort to speak our language.”

Francisco: “I found it innovative that the festival was opened by a theater group that include dance and video on stage.”

Eliannis: “I found it spectacular and very passionated. I love dance and performing arts and in this piece they were both perfectly combined.”

Rosani: “Innovative and funny. I specially liked the synchronicity of the actors when they were moving together. There was a great choreographic harmony. It was exciting to see them dance tango in such a sensual way.”

“Ezequiel Sanucci dances together with the attractive German dancer Lydia Müller, both very strong dancers. Sannucci is doing very well as a choreografer in the development of the fusion, with interesting work, based on the life of the couple and the aimed goal: the residence permit which is asked by the EU countries. Their tango evolutions, some jokes, and some virtuose dance movements are remarkable.”

“The night brought then the actions of Tango Residence Permit, a Dutch production directed by another countryman based in The Netherlands: Ezequiel Sanucci. The piece seeks to confront the world of a rational German with the one of a passionate Argentinean. The protagonists were Sanucci himself and Lydia Müller.”

The Netherlands: In the first presentation still on experimental phase.

Recommended! Entertaining, easy, witty, original. Unfortunately, the dance and acting on the piece is after 45 minutes
over! Beautiful, dancing scene in slow motion with a beautiful symbiosis between the repetitive drumbeats and the repeated
dance movement. Impressive also by its simplicity and originality.

The audience is constantly laughing at well-timed scene changes, as a modern film. Good work to make it happen so fast.
At the end I had to taste some more emphasis on sensuality I might like, another emotion calls than the intended laugh.
Although there are really funny moments in it, I think the dramatic potential of this dance-theatre-research has more valuable
than to work as a comedy. But in any case, this a piece that I  would like to see again and that I recommend everybody not to
miss this chance, now that it is still offered for free.

“He surprised everyone among all the other pieces (at the XIII Festival Nuevas Tendencias in Mendoza 2008.), mainly because of
his proposal, the use of different types of lighting, the sounds which are not very identifiable to the ear and because of his body
language for the speed and skill of his movements, unusual in the Argentinian dance. With a surprising end that  that leaves the
audience in a state of shock ”